The Hirshhorn Museum and Sculpture Garden is an art museum beside the National Mall, in Washington, D.C., the United States. The museum was initially endowed during the 1960s with the permanent art collection of Joseph H. Hirshhorn. It was designed by architect Gordon Bunshaft and is part of the Smithsonian Institution. It was conceived as the United States' museum of contemporary and modern art and currently focuses its collection-building and exhibition-planning mainly on the post–World War II period, with particular emphasis on art made during the last 50 years.[1] Notable artists in the collection include: Pablo Picasso, Henri Matisse, Mary Cassatt, Thomas Eakins, Henry Moore, Jackson Pollock, Mark Rothko, Franz Kline, Hans Hofmann, Morris Louis, Kenneth Noland, John Chamberlain, David Smith, Francis Bacon, Willem de Kooning, Milton Avery, Ellsworth Kelly, Louise Nevelson, Arshile Gorky, Edward Hopper, Larry Rivers, and Raphael Soyer among others. Outside the museum is a sculpture garden, featuring works by artists including Auguste Rodin, Jeff Koons, and Alexander Calder. [2]

The building itself is as much of an attraction as anything inside, likened by many to a large spacecraft parked on the National Mall. The building is essentially an open cylinder elevated by four massive "legs", with a large fountain occupying the central courtyard. Before Gordon Bunshaft, of Skidmore, Owings and Merrill, designed the building, the Smithsonian staff reportedly told him that, if it did not provide a striking contrast to everything else in the city, then it would be unfit for housing a modern art collection.

In the late 1930s, the United States Congress mandated an art museum for the National Mall. At the time, the only venue for visual art was the National Gallery of Art, which focuses on Dutch, French, and Italian art. During the 1940s World War II shifted the project into the background.

Meanwhile, Joseph H. Hirshhorn, now in his forties and enjoying great success from uranium-mining investments, began recreating his collection from classic French Impressionism to works by living artists, American modernism of the early 20th century, and sculpture. Then, in 1955, Hirshhorn sold his uranium interests for more than $50-million. He expanded his collection to warehouses, an apartment in New York, and an estate in Greenwich, Connecticut, with extensive area for sculpture.

The Burghers of Calais

The Burghers of Calais at Hirshhorn Sculpture Garden (closeup).

A 1962 sculpture show at New York's Guggenheim Museum awakened an international art community to the breadth of Hirshhorn's holdings. Word of his collection of modern and contemporary paintings also circulated, and institutions in Italy, Israel, Canada, California, and New York vied for the collection. President Lyndon B. Johnson and Smithsonian Secretary S. Dillon Ripley successfully campaigned for a new museum on the National Mall.

In 1966, an Act of Congress established the Hirshhorn Museum and Sculpture Garden, Smithsonian Institution. Most of the funding was federal, but Hirshhorn later contributed $1-million toward construction. Joseph and his fourth wife, Olga Zatorsky Hirshhorn, visited the White House. The groundbreaking was in 1969.

Abram Lerner (born 1913) is named the founding Director. He oversaw research, conservation, and installation of more than 6,000 items brought from the Hirshhorns' Connecticut estate and other properties to Washington, DC.

The museum and garden complex was designed by Gordon Bunshaft (1909-1990) and provides 60,000 square feet (5,600 m2) of exhibition space inside and nearly four acres outside in its two-level Sculpture Garden and plaza. The New York Times described it as: "a fortress of a building that works as a museum."

Joseph Hirshhorn spoke at the inauguration (1974), saying: "It is an honor to have given my art collection to the people of the United States as a small repayment for what this nation has done for me and others like me who arrived here as immigrants. What I accomplished in the United States I could not have accomplished anywhere else in the world." One million visitors saw the 850-work inaugural show in the first six months. 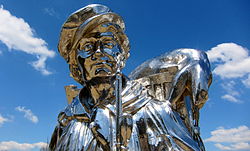 Koshalek, 67, was president of Art Center College of Design in Pasadena, Calif., from 1999 until January 2009. Before that, he served as director of The Museum of Contemporary Art in Los Angeles for nearly 20 years. At both institutions, he was noted for his commitment to new artistic initiatives, including commissioned works, scholarly exhibitions and publications and the building of new facilities that garnered architectural acclaim. He worked with architect Frank Gehry on the design and construction of MOCA's Geffen Contemporary (1983), a renovated warehouse popularly known as the Temporary Contemporary. He also worked with the Japanese architect Arata Isozaki on the museum's permanent home in Los Angeles (1986).[4] 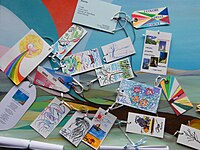 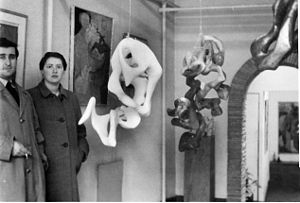