On a first stanza by Christopher Wiseman

The Christmas poet tried a villanelle,

But, blocked, he couldn't do it, couldn't find

Because he felt that he could help a bit

But, blocked, he couldn't do it, couldn't find

The proper rhyming word that he could fit

Into the rhyme scheme of a villanelle −

Still, he felt that he could help a bit

If he composed a simple terzanelle,

For it was much the same form, after all.

Into the rhyme scheme of a villanelle

His Christmas correspondent made that call

And presto! There it was: an Xmas carol

In very much the same form, after all!

After all the angst and folderol

The correspondent tried a terzanelle

And presto! There it was: an Xmas carol, SONG: One bird flying high two fish swimming by here we sit and watch the river and the summer sky

Violinist Heinz Czech has composed a  kind of a duet on the piano  for the song.


Image and Music are proposed by Cecilia du Toit and Heinz Czech.

The Kodály Method, also referred to as the Kodály Concept, is an approach to music education developed in Hungary during the mid-twentieth century by Zoltán Kodály.

It is a method used in Kodaly Academy (GB) and is meant for Nursery Schools children in order to develop their rhythm for music and singing ability. I see the world

when I close my eyes

when I listen in the blue.

I hear a voice which has lived

in the blue so long that it contains

all memories, all mistakes, all fantasies.

A voice in zero, where it’s quiet

so quiet that I can hear all names

in one name, where the blue flame licks

this name to a burning whisper,

the voice that lifts you from inside

takes you out to sea

where a thunderstorm is building

and brings you back over the still water,

the voice that goes

where nobody else dares.

That voice burns in me,

(courtesy of the author) kneeling on the floor

dripping paints on your canvas.

From the dark night of your mind

as your hands move rapidly around

where I sink deep and deeper

wrapped in the colours

of your Greyed Rainbow.

For a while I will linger and listen to

the silence of the ocean

(or maybe to the roaring motor of your Oldsmobile convertible)

I will write a poem just for you 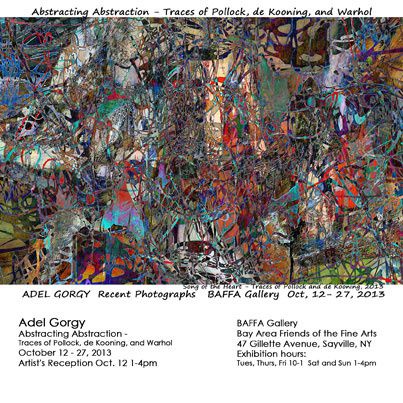 I thank the poets whose poems have inspired these collaborations and those for whom my work was inspirational.

I also thank Aeronwy Thomas, the first poet with whom I collaborated, Immagine&Poesia the international art/literary movement in Torino, Italy, and its president, Lidia Chiarelli, who sparked these collaborations, and Stanley H. Barkan, the publisher of Cross-Cultural Communications, who published these collaborations as the Art & Poetry Series of broadsides.

For all you, my dear friends, I am ever grateful. 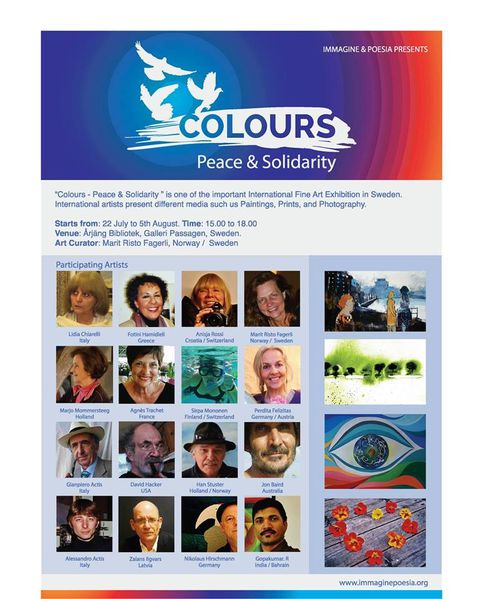 actually, with him in spirit, in the kitchen

of his quaint brownstone on West 12th Street

in Manhattan, decades after his death.

And quite at home with him, I chop and slice;

to perfection; roast, the prime tenderloin of beef

he’d earlier instructed me to hand-rub with

(I used sea salt and that was ok with him.)

Right now, he’s reminding me to stir my roux,

then I should add crisp bacon bits, made earlier,

to the chopped spinach I just finished sautéing.

He says I should wait till the last minute

to toss the mélange of local field greens with

the lemongrette he had me make in lieu of

vinaigrette, because, it seems that vinegar

often spoils the taste of wine. As for the wines

with dinner: for the salad, I’m chilling

with the beef dish, a 10-year-old California

Zinfandel; this followed by a 2010 Pinot Noir

from Oregon, paired with artisanal cheeses

from Vermont and Connecticut, plus

and, in the frig, chilling, a late-harvest, Long Island

away on a silver tray till it’s time for dessert.

According to Jim, red wine should be served at

room temperature, and since older reds have a layer

of sediment in the bottle, he said the Zin will need

to be decanted, and that, right before serving;

he wants the Pinot to breathe 15 minutes, or so,

in the glass before being drunk.

(The aeration of younger reds will rid those wines of

their chalky tasting tannins.) All this for my guests

who’ll soon be sitting round my dining table akin to

Jim’s 60 inch round green marble slab of a tabletop,

where, before the first bite of the Jim-inspired,

RUTH SABATH ROSENTHAL is a New York poet, published in literary journals
and poetry anthologies throughout the U.S. and in Canada, Greece, India, Israel,
Romania, and the U.K. In 2006, her poem "on yet another birthday" was nominated
for a Pushcart prize. Ruth has 3 full-length books of poetry: "Facing Home and Beyond,"
"little, but by no means small," "Food: Nature vs Nurture," and a chapbook "Facing Home."
For more on Ruth, visit website:  http://www.ruthsabathrosenthal.moonfruit.com